A new book tells the story of the most popular arena sport in America in the 1890s: women’s bicycle racing. Women on the Move: The Forgotten Era of Women’s Bicycle Racing by Roger Gilles covers the short-lived heyday of women’s professional bike racing, from 1895 to 1902. At a time when women were still actively discouraged from taking up sports, these women bucked norms and got in the saddle. 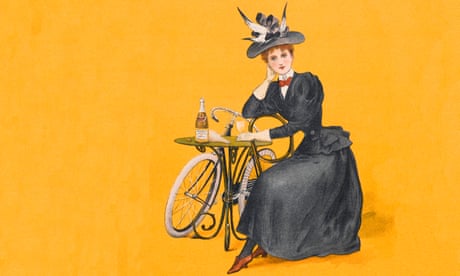 This part of the history of women’s cycling is relatively unknown. The perfect storm of conditions came together to create this seven-year period where the sport of women’s bicycle racing could thrive. It was largely thanks to the invention of the safety bicycle, which look much like the bikes we ride today, in contrast to the high-wheeled bikes that were dangerous for riders. “So during the mid-1890s everybody who could afford a bicycle basically bought one, and by 1897, in terms of bicycle manufacturing, the industry basically collapsed because everybody had their bicycles, so the bicycle boom itself was short-lived,” says Gilles. Bicycles are also associated with providing women a freedom they had never known before, allowing them the ability to move around the world unattended and to congregate with their friends, often without chaperones.

The bicycle boom drove the interest in racing – so men and women started to race. At the time, men’s races were around-the-clock affairs. They were six-day races, 24 hours a day, based on the model of competitive walking races and the high wheel races of the old days. “They were essentially just endurance tests, and there was drug use and other things to make the races doable, but it was a spectacle,” Gilles says. In contrast, people at the time thought women were too weak to compete in these kinds of endurance races (which is ironic, knowing that modern day science actually shows that women’s bodies are built for endurance sports and excel at them), so the races were shortened from 24-hour affairs to two or three hours a day over the course of several days. And that had the effect of creating a fun viewing experience for fans, who could go to the track for a couple of hours to watch. It also allowed women to go faster, because they only had to push for a couple of hours a day, which meant that their speed was on par with the men. As a result, the women’s races became wildly popular, even more so than the men’s races.

The athletes made good money, and most even became the breadwinners for their family, something that was virtually unheard of in the Victorian era. Women were also still expected to wear the large hoop skirts and conservative clothing, but these cyclists were athletes who took themselves seriously. They trained hard, and are probably some of the first American women to have committed themselves to a sport, even if the results of their training made them look “unfeminine”, which would have been incredibly controversial at the time. They also realized that having these costumes flapping and hats blowing had a negative effect on their speed, so they began to modify their clothing to make it more conducive to racing competitively. This would have been seen as incredibly radical, particularly at a time when even women who played baseball were expected to do so in full skirts.

“To their credit, these women said: ‘As best we can, we’re going to wear the same uniforms as the men,’” says Gilles. “They weren’t able to expose their arms and legs, so they had to wear tights or hose or long-sleeved woolen tops. So it obviously had the residual effect of attracting some of the men and boys to the races because they were able to see women’s bodies on display, which was quite rare, but again I feel proud of these women because from their perspective it was just, ‘Hey, we want to go fast, so we’re going to wear the outfit that makes us go fast.’”

The concerns and sexism that these women faced, from criticisms of their cycling attire to perceptions of them as too weak or frail for athletics to the way they were written about in the media, are not all that different from the cultural forces that female athletes are still fighting today. When the women raced, they were viewed less as competitive athletes and more like petty women, and this jealousy was played up in the newspaper coverage of the time. There were references to tears and hair pulling, and the athletic feats of the cyclists were downplayed even as the fastest women were topping 20mph on their bikes.

Gilles’s book is a window into a virtually unknown time in women’s sports, and it’s important because it adds to the history of female athletes who have overcome so many obstacles to be able to compete. It’s also more evidence that women have always been more suited to sports than they’ve been given credit for, and that when the have the opportunity to train, they’ve always been just as capable as the men. “Women of today that are interested in athletics should know that back in the 1890s, 120 years ago, there were women in America that were facing the same kinds of challenges,” says Gilles, “and they were flourishing despite those challenges.”