SWANSEA’S bus museum is appealing for donations, sponsorship and volunteers as it struggles to survive.

The museum, based at Bevans Row in Swansea’s SA1 development, has an impressive collection of historic vehicles.

The museum also contains a collection of Scammell mechanical horses and military vehicles including Land Rovers and a Green Goddess fire engine.

On Sunday, the museum opened its doors for a special family day in which members of the public were treated to free rides to Mumbles and back on open topped historic buses.

Former South Wales Transport bus conductor and driver Alan West, the chairman of the Swansea Bus Museum, said the Seaside Splash! event was one of a number they are planning to raise the profile of the museum which was finding it tough to survive.

He said:”We don’t get financial backing from any institutions of businesses at the moment including the local council or the Welsh Government.

“We have a great resource here and are holding on to a lot of the transport history of this area.”

Speaking on Sunday, Mr West added: “Luckily, the sun has come out for us and we’ve been very busy, the trips to Mumbles and back being very popular.

“We stop in the Mumbles area long enough for our passengers to have an ice cream, then it’s back to the depot. It’s not bad value because it’s all part of the £3 entry fee to the museum.”

The Swansea Bus Museum was formed by Mr West and others in 2004 and initially it was based in Hafod, Swansea, eventually switching to the site in SA1 close to the new Swansea University Bay Campus.

‘We really need to be pulling together now’

Mr West said the museum had considered a number of alternative sites as ownership of its own premises would make applying for grants easier.

But for the time being, the museum officials have now decided to stay in SA1.

Mr West said: “I’m making a heartfelt appeal for as much assistance as possible from members and volunteers on Sundays.

“The future success of the museum depends on all of us, while failure will see the break-up of the collection and the likely loss of many historic vehicles to the scrap man, something we have worked hard to avoid over the years.

“We really need to be pulling together now.”

Explaining the role of volunteers, Mr West said: “Running the museum involves much more than just fixing buses. We need people to help with general duties such as assisting the general public during our opening times and keeping the museum clean and tidy.

“During our event days there is always plenty to do with general organisation, assisting the public, driving (subject to appropriate licence) and conducting.

“Our stall is an important source of income, both during our own shows and at other rallies we visit. An hour spent practising your selling skills can be good for the soul.”

The museum is open to the public every Sunday between 11am and 4pm.

Adult admission is £3 (except shows when higher charges may apply), with accompanied children under the age of 16 admitted free.

Some of the buses and coaches in the museum’s collection are also available for private charter and have proved popular at weddings.

New Year message from our Chairman:

First of all I wish you a very Happy New Year! May 2016 look favourably on us all!

2016 is a make or break year for us. As you may be aware, our lease expires at the end of this year and we have been notified that it is highly unlikely to be renewed under the same favourable terms. Our building sits within the SA1 Local Development Area, which is set to evolve rapidly following the opening of the new Swansea University campus last September. It’s only a matter of time before our former industrial site will be consumed for residential and/or leisure use. In the short term, increased occupancy of adjacent units has pushed up rents.

You may recall that we carried out a business planning exercise with Landsker Business Solutions Ltd. in 2014. Key to the execution of the plan ls the securing of our own property, either through direct ownership or a very long term lease. Such an arrangement will make it easier for us to obtain grant funding, something we have had only limited success with so far. Our present site arrangement does not fit the criteria to achieve this.

We’re presently investigating several alternative sites in the Swansea Bay area and will place renewed urgency on the situation now that Christmas is behind us. In the meantime, you may have noticed that the museum is currently closed to the general public. This is due to a major housekeeping exercise underway in the spares area at the far corner of the museum in preparation for the move. The need to create space to work in that area has meant that some vehicles have needed to be moved into the public display area, restricting movement there. For public safety reasons the trustees decided on the closure during this quiet time of year. The museum will reopen to the public for the Swansea Historic Vehicle Autojumble on Sunday February 21st , when our vehicles will be on display outside, before our own Running Day on the following Sunday, February 28th.

I’m making a heartfelt appeal for as much assistance as possible from members and volunteers on Sundays during this “down” time. The future success of the museum depends on all of us, while failure will see the break-up of the collection and the likely loss of many historic vehicles to the scrap man, something we have worked hard to avoid over the years. We really need to be pulling together now!

To this end I request that as many of you as possible attend the next monthly members’ meeting at the museum on Sunday January 10th at 11am.

I trust that I can count on your continuing support at this crucial time.

“The December issue of Bus & Coach Preservation magazine is out now, featuring the story of the restoration of our AEC Bridgemaster. Also not to be missed is a 4 page round up of South Wales Transport buses pre- and post-nationalisation.” 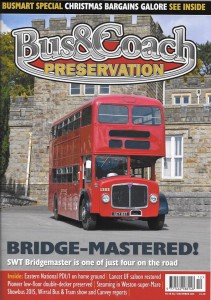 IN his 45 years behind the wheel of Swansea buses, Peter Nedin clocked up well over a million miles without ever having an accident.

And as a retirement present like no other, the 68-year-old has been given a full size open top double deck bus by First Cymru.

He is not taking it home, though. Peter, from St Thomas, volunteers at Swansea Bus Museum, and his former colleagues thought restoring it would make the ideal hobby.

So Peter, and his fellow volunteers at the museum, will now restore the bus — a Bristol VRT open topper — to its former glory before putting it on display for all to see.

“People had often joked that I should be given a bus because I’d worked for the company so long, but I never actually expected it to happen,” said Peter.

“It was such a shock and a great honour to be told the old open topper would be donated to the museum in my name.

“It’s in really good condition for its age and it’s nice to be able to keep this in the area, helping to celebrate its history.

“I had a fantastic career at First, and a great sending off when I left. I’m now enjoying retirement and wondering how I ever really had the time to go to work.

“I have plenty of little jobs to do around the house and have been enjoying days out here and there, alongside my work at the museum.”

First Cymru managing director Justin Davies said: “It was a sad day for us when Peter left the business. He has been a perfect employee, he’s a brilliant driver and was great with all the customers.

“We recognise though that after 45 years of working for us, five of which have been on a part-time basis, he wanted to spend more time doing the things he loves even more — restoring old buses.

“To help him with this we donated one of our oldest vehicles — which we had recently taken out of our fleet — to the museum in his honour. We hope he gets much fun and enjoyment restoring it back to its former glory.”

MEMBERS of Swansea’s historic bus museum say they are upset after being told they cannot relocate to a former bus garage in the city.

The Swansea Bus Museum said the unit they are currently leasing is costly and too big.

So they sent an email to Swansea Council asking to purchase

the old bus garage on Clarence Street, but this was rejected by the council.

Alan West, chairman of the museum, said: “The old bus garage is of great historical value to us and we thought it would be the perfect place to move the museum to.

“At the moment the current unit we lease in the SA1 Business Park is costing us a lot in rent and rates.

“We only have three years left on the lease, so are looking for somewhere smaller and cheaper to move to.

“The place where we are now is far too big for us. So when we found the old bus garage we thought it would be perfect.”

However the museum group was told by Swansea Council that the building, close to the former Vetch football ground, is structurally unsafe and needs to be demolished. Mr West said: “That bus garage has been there since the 1950s and was custom made for United Bus Wales.

“It is a piece of heritage and we would be so upset if it was demolished. It was in use right up until last year when the electrics were condemned, but I think the building itself is sound.

“We are really interested in taking it on and think it would be a perfect place for the museum.

“The location is great and there is lots of parking nearby. As it is very near to the Quadrant I think it would be the perfect place because there would be plenty of footfall.”

A Swansea Council spokesman said: “We couldn’t agree for the Swansea Bus Museum to relocate to Clarence Street, because the building there is structurally unsafe and needs to be demolished.

“The plan is to put a temporary car park on site once the building has been demolished, pending redevelopment in the long term.”

At the museum there is currently a large fleet of buses including a 1959 Bridgemaster double decker.

The bus is one of only four surviving vehicles and the museum is looking to restore it so it looks back to its best in time for the 100 years celebration of South Wales Transport later this year.

South Wales Transport began shortly before the outbreak of the First World War and, at its height, it was responsible for 92 million passenger journeys a year. This year South Wales Transport is taking steps to celebrate the history of buses in order to mark its centenary.

Iconic bus companies from South Wales will be recalled in a new book, to be launched as part of the Roads and Road Transport Associations’s event Wales on Wheels, at the National Waterfront Museum, Swansea, on Saturday, May 17.

The weekend of events will mark Swansea Bus Museum’s centenary year, and Return Ticket — the Story of South Wales Transport, by former Evening Post News Editor Jonathan Isaacs, will detail the troubles and triumphs of ‘The Transport’, as it was affectionately known.