Brecon Beacons Sunday and Bank Holiday bus to be axed 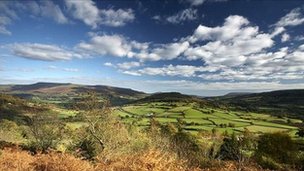 A bus service used by thousands of visitors to the Brecon Beacons is being axed as part of budget savings of £650,000 over the next two years.

Brecon Beacons National Park Authority faces a budget cut of 8.9% from the Welsh government from April.

It follows a public consultation over the bus, which brings passengers from Cardiff, Newport and Swansea on Sundays and summer Bank Holidays.

But a bike bus service will still run on Sundays and summer Bank Holidays.

The authority had said it needs to make savings of more than 13% over the next two years, which prompted a review of its services.

It has 130 staff and has responsibility for planning issues and managing the national park, which attracts 4.15m visitors a year.

Earlier this year the authority also decided to cut seven posts as part of its savings plan.

The authority said it had decided to stop the service as a result of falling income from partners and concessionary fares, and a significant rise in tendered prices for the coming year. 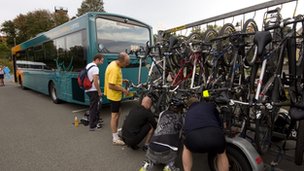 The bike bus will still run during the summer

It added that the Cardiff to Brecon bike bus using a 24 bike trailer will continue to run from 25 May to 28 September on Sundays and Bank Holidays.

The service will interchange with the Hereford 39A service in Brecon and then shuttle between Brecon and Abergavenny twice during the day.

Martin Buckle, Vice Chair of the National Park Authority’s Planning Committee said: “We understand how very disappointed many of our regular passengers will be at the withdrawal of the service.

“We hope they will still be able to travel to the National Park by making use of the Monday to Saturday bus services, and we will continue to work hard to promote these.

“The bike bus has been very popular with cyclists wanting to explore the National Park and to ride the Taff Trail back to Cardiff, and we are very pleased that we have been able to negotiate this new arrangement to allow the bike bus to run.”

The Beacons Bus bought passengers into the area on Sundays and bank holidays between May and September.